All articles tagged with "Ass"

This guy bragged about how he was able to handle big loads. By that he meant big women. She told him he had never handled anything like her before and he told her she was a piece of cake. She dared him and he took the bait. She then facesat on him and she did things to him he had never done before and he was in a lot of pain but he tried his best to endure it so as not to be a wimp.

Madame Marissa felt that this loser's headed needed to be reminded that it was meant to think and not to just regurgitate things. She wanted someone who thought for himself so she used her ass to facesit on him and to humiliate him. She had a lot of fun crushing his face and his head. And by the time she was done, she knew she had achieved what she wanted.

This hot mistress loves obedient slaves. This new slave was not as obedient as she wanted her slave to be. So she used her ass to facesit on him. She not only made him lick her ass, but she also had him lick her pussy and she rubbed her clit on his face. She made sure he was humiliated and was almost getting choked before she let him go knowing he had learned his lesson.

Madame Marissa facesits on slave for eating her chocolate

Madame Marissa caught her slave eating her expensive chocolate without her permission. She was mad as she had told him to always ask before he ate her chocolate but he did not do it. She chose to facesit on him and she made him choke on her ass as she covered his entire face with her ass. He learned his lesson and he never did it again for fear of what she could do.

Mistress Becca loves to try new things. She was watching naughty videos on the internet when she stumbled upon facesitting fetish. She thought it was interesting and she wanted to try it. So she lured a guy to her house and she took advantage of him to have fun and try facesitting. She has a big ass and she sat on him with it and enjoyed riding his face with her ass. 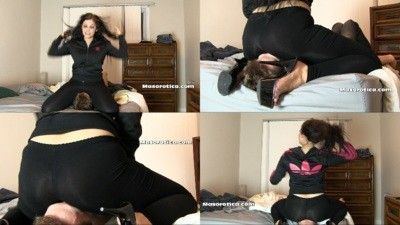 Lady Amy facesits on guy for messing with her

Lady Amy wanted to show this loser that she was not one to mess with. He had gotten used to messing with her and getting away with it. She was fed up of it and she tortured him. She did so by facesitting on him. She crushed his face with her butt and she choked him too. He was so afraid of what she would do to him next, that he pleaded with him to forgive her.

Mistress Natasha gets even with guy

Mistress Natasha is an unforgiving person. When you piss her off, she has to do something to get even. For this guy, it was facesitting on him. She sat on his face and forced him to lick and smell her ass. She even farted on him and she nearly choked him as she did. The shaken guy begged for mercy as he knew she was pissed and she meant business.

Mistress Amy was not one to shy away from punishing anyone. She was pissed at what this guy she had contracted to do some work in her house had done. She was paying him so he had to do what she wanted. She chose to facesit on him to teach him a lesson and show him that she would not let him get away with doing what she did not want.